Wildlife watching is undoubtedly one of the very best things you can do in Costa Rica, the country home to a mind-boggling array of unique and endemic creatures. Yet above all animals, including monkeys, birds, sloths, whales, crocodiles and dolphins, turtles hold by far the biggest appeal. Turtle spotting in Costa Rica is among the most ‘time & place sensitive’ endeavors, requiring you to be on specific beaches, at specific times of year, to admire their nesting and/or hatching rituals. Widely considered one of our planet’s most mesmerizing natural phenomenon, the mass nesting events for which Costa Rica is so renowned are certainly reason enough to visit the country, let alone the fact you’ll find a wide array of adventure activities to enjoy once here.

Following is your guide to turtle spotting Costa Rica: the where, when and how to admire some of our planet’s oldest and most precious residents. 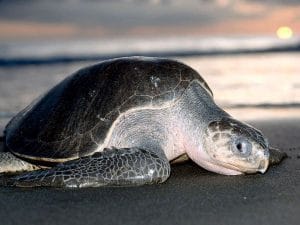 What kind of turtles can you spot in Costa Rica?

Home to four out of seven sea turtle species on our planet, Costa Rica attracts a host of biologists, researchers and wildlife-watching visitors every year. To your average turtle-watcher, sea turtles appear very similar but they are in fact quite distinct and, as such, boast different nesting seasons. The main turtle species calling Costa Rica home are: 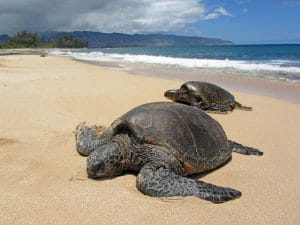 When is the best time to spot turtles in Costa Rica?

Although you’re likely to see some turtles in all the hot-spots, at any time of year, it helps to know the specific nesting season of each type so you have the highest chance of spotting the largest colonies.

Olive Ridley – They may boast the most numerous arribadas of all yet the mass nesting events of Olive Ridleys are still as unpredictable as ever. The season is nearly year-round, although the largest nesting events tend to occur in September and October and, some years, as late as November. Arribadas are closely linked to full-moon nights and, usually, the beaches get a ‘warning’ of a few hundred nesting turtles for a few consecutive nights, before the nesting culminates in the arrival of thousands. Although we couldn’t possibly advise which week of the two months you should plan your Costa Rica adventure vacation, you should simply aim to be here in September or October to increase your chances of timing it just right and, once here, keep abreast of the latest local news, ready to plan a last-minute trip to their favored nesting sites.

Leatherback – Leatherback turtles take to nesting on the eastern coast in the first half of the year, mostly between February and June with peak events happening in March and April. On the western coastline, however, they nest between October and February, so you have multiple chances to spot these elusive creatures.

Hawksbill – Highly endangered and boasting declining numbers, the hawksbill is the hardest sea turtle to spot in Costa Rica. What doesn’t help your spotting chances is the fact that, unlike the other species, the hawksbill nests alone, mostly in September and October, so you’d have to be especially lucky to see one (let alone more) on your visit to Costa Rica.

Green Sea Turtles – The peak nesting months of the green sea turtles are August and September although nesting season runs from July to the end of October.

Where should you go to spot turtles in Costa Rica?

Start researching turtle-watching guides to Costa Rica and you’ll no doubt find references to which side of the country’s two coastlines attract which species. Knowing specific spots, however, will help you better plan your visit.

Tortuguero National Park – This incredibly wild reserve on the northern Caribbean coast isn’t called ‘turtle heaven’ for no reason. Tortuguero attracts all the four Costa Rica turtle species in nesting season and is the best place to specifically spot the endangered green sea turtle. A stunning maze of canals, jungle forests and glorious beaches, Tortuguero is remote and hard to reach, which makes a visit all the more unforgettable.

Nicoya Peninsula – Ostional Beach regularly makes worldwide news every year, when it hosts Olive Ridley arribadas that number in the hundreds of thousands. This is one of only a handful of beaches in the world that see this kind of turtle spectacle and is, as such, avidly protected. Being so popular, however, means that regular guided night-time tours are on offer, to give visitors (and locals) the chance to see these mesmerizing events, whilst maintaining the site safe for the turtles. 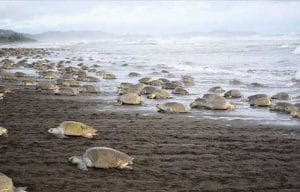 ost sea turtle species it hosts, Guanacaste’s Las Baula attracts the highly endangered leatherback. The park’s Grande Beach is the 2nd-largest nesting spot for these majestic beasts in the world and although tours are organised during nesting events, they are only organised a few days in advance. For obvious reasons, given the leatherback’s endangered status, all visits during nesting season are strictly regulated.

Santa Rosa National Park – The second-largest arribada beach for Olive Ridley turtles, Guanacaste’s Santa Rosa is one of the country’s smallest and least-known yet most pristine reserves. The beaches here – Nancite in particular – are quite remote and necessitate some real commitment (in the hiking sense) but at least you’ll be in the company of far fewer visitors if you make the effort to go.

Gandoca-Manzanillo Wildlife Refuge – Located on the southern Caribbean coast, this remote and lesser-visited refuge is a prime turtle nesting hub, not only for attracting all four species but for attracting the most numerous leatherback colonies of all. Visit between March and July and you’ll likely have the chance to witness a nesting event of at least one species, if not more. Just south of Puerto Viejo de Talamanca in the Limon Province, Gandoca-Manzanillo is an off-the-beaten-path destination nestled in one of the most jaw-dropping corners of Costa Rica, home to a flurry of exceptional wildlife.

The Osa Peninsula – The southern coast of the Osa Peninsula plays hosts to nesting turtles almost all year long. The sheer concentration of turtles here means that if you miss a nesting event, you will likely be able to admire a hatching event instead. Generally speaking, the months with the least number of turtles are January and February so head here at any other time of year and you’ll be at the ‘prime’ nesting time for at least one turtle species.

How to visit turtle-nesting sites in Costa Rica

Turtle nesting beaches in Costa Rica are fervently protected and you can only visit through authorized entry points, following very strict protection guidelines. The main emphasis is on people being mere observers, neither getting in the turtles’ way nor ‘helping them’ in any manner. Plan your visit with a local guide, follow the rules and enjoy being a spectator to a truly magnificent natural event and you can be sure your Costa Rica vacation be a once-in-a-lifetime experience.

At Costa Rica Rios, we plan outstanding adventure vacations for families, honeymooning couples and solo travelers alike. If you love adventure, nature and wildlife, and wish to spot amazing sea turtles in the wild environment, let us help you plan the adventure of a lifetime.