Costa Rica has a worldwide reputation as being an amazing destination for adventure vacations that include climbing, exploring and just marveling at the sight of volcanoes.

Active doesn’t mean eruptive where a volcano is concerned

While there are six ‘active’ volcanoes in Costa Rica, this does not mean they are prone to violent eruption, but instead simply show signs of ‘activity’ at the summit, either in the form of the slow release of molten lava or hot gases. Many of Costa Rica’s volcanoes have caldera lakes which have formed in the crater at the summit and which help to create a remarkable sight. However, be careful if you think these lakes look inviting for a swim as some are highly acidic owing to the release of sulfur dioxide from the volcano which dissolves in the water to create sulfuric acid, as well as the direct release of hydrochloric acid.

More plates than a dinner service!

The main reason for Costa Rica having so many volcanoes is because it lies close to the intersection of several tectonic plates which go to make up the surface of the Earth. These plates are constantly moving, and at times, that movement creates a weakness in the Earth’s crust up through which molten lava can flow. Volcanoes are formed over the passage of millennia, and are ‘weak spots’ when pressure caused by tectonic plate movement below is released.

Specializing in adventure vacations in Costa Rica, here at Costa Rica Rios, aside from our 8-day Adventure Tour, we can create individual, bespoke adventure packages, including a Honeymoon Adventure Vacation, which can include guided tours of many of Costa Rica’s exciting volcanoes. 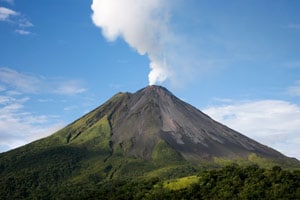 Costa Rica Luxury Vacation – The Indulgent Adventure of a Lifetime