When you look at Costa Rica on the map, it is quite clear that the country has two coastlines, to the east of the country lies the Caribbean Sea, while to the west lies the Pacific Ocean. Combined, the total coastline of Costa Rica is 912 miles (1,466km). However, here at Costa Rica Rios we know something that we think will really surprise you.

How much longer is the Pacific coastline than the Caribbean coastline of Costa Rica?

How would you divide up the 912 miles of coast? Clearly the west coast is longer, but by how much? At a quick glance you might estimate that the Pacific coast was roughly double the length of the Caribbean coast, but like many you’d be wrong, and by a long way.

Believe it or not, the Pacific coastline is six times longer than the Caribbean coastline of Costa Rica. Yes, even if you’ve got a map in front of you it’s hard to believe, but it is true. So how is this optical illusion possible?

What that amount of coastline also means is… lots of beaches.

Beaches on the Caribbean coast of Costa Rica

Beaches on the Pacific coastline of Costa Rica

Specializing in adventure vacations in Costa Rica, here at Costa Rica Rios, aside from our 8-day Adventure Tour and Honeymoon Adventure Package, we can create individual, bespoke adventure packages to concentrate on your favored activities. 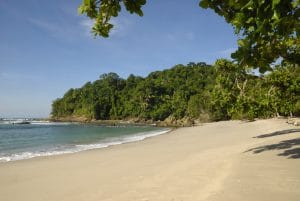 Costa Rica is home to some of the most impressive and active volcanoes in the world, so it’s unsurprising that we ...
Read More »