Costa Rica may be best known as an ideal sun-worshipper’s paradise, and very few would ever dare argue. With its seemingly endless stretches of beautiful beaches, all framed by luscious tropical jungles cascading straight into crystal clear waters, there’s no denying that, in this nook of the world, surf is queen.

Yet discerning travellers know that Costa Rica is a country which has been inherently shaped by its majestic mountains. Every aspect about this enticing land has been formed, coloured and flavoured by its five mountain ranges. The mountains in costa rica are beautiful. Collectively, they’ve spawned 16 climate zones, 14 major river systems, numerous caves and canyons, seven active volcanoes and over 60 which are either extinct or temporarily pretending to be. Overall, Costa Rica’s horizon is dotted by 176 peaks. When you consider just how small this country really is (ranked 129th in the world by area) then those numbers start to sound quite impressive indeed.

Naturally, this spells great news for all those who enjoy idyllic beaches yet wish for a healthy dose of active pursuits when on vacation. After all, as all adrenalin junkies know far too well: Where there’s a mountain…there’s always adventure!

The most revered aspect of Costa Rica is its diminutive size, which makes a rewarding and varied vacation infinitely easy. You have no excuse to not choose visiting here: you could easily go from beach to peak in a matter of hours. Adrenal junkies, or anyone who loves to get their pulses racing in stunning natural surroundings, will have an absolute field day in this most diverse Central American country.

Here’s a general overview of Costa Rica’s majestic mountains, and all they have to offer…for your adventurous pleasure. 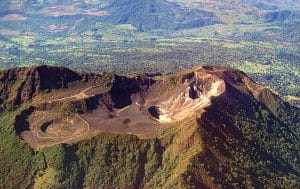 Home to some of the most famous volcanoes in the country, including Irazu (the highest at 3,432m), Poás, Barva and Turrialba, the Cordillera Central is part of the Andean-Sierra Madre Mountain Range which runs the entire western spine of the Americas. Recent seismic activity has caused both concerns and enticement, and this region is becoming increasingly popular with adventure seekers who wish to get off the beaten path, as infrastructure here is still somewhat limited. The sheer amount of fun and active pursuits which can be offered here makes this one of the most popular spots in the whole country, and the one from where Costa Rica Rios run their week-long adventure trips. Along with Cordillera Talamanaca, this is Costa Rica’s only other mainland UNESCO listed site.

The Cordillera de Guanacaste is on the northern edge of Costa Rica, and rides its wave along the border with Nicaragua. The three most popular volcanoes here are Rincón de la Vieja, Miravalles and Oros; with the first two being spectacularly semi-active. The ease of access, excellent infrastructure, magnificent nature and proximity to the coast make this arguably the very best mountain range to explore. This is the one of very few places where you can hike up a volcano, and frolic in the turquoise waters of the Pacific, all on the same day. Cordillera de Tilarán 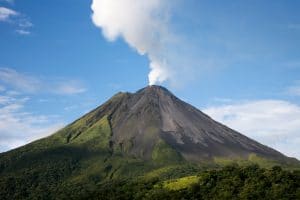 Volcano Arenal, one of the world’s most active peaks, resides in this splendid mountain range, which continues just south-east of Guanacaste. Just south of Lake Arenal is the Monteverde Cloud Forest, one of Costa Rica’s premier eco-tourism destinations and a phenomenal wildlife lover’s paradise.

This southern mountain range is shared between Costa Rica and Panama, and home to the former’s highest peak: Cerro Chirripó, which stands at 3,820m above sea level. A summit ascent of Chirripó is one of Costa Rica’s many bucket-list activities yet is anything but a walk in the park. The challenging hike requires much sweat, a few tears and perhaps a few emotional outbursts but, it should be said, is infinitely rewarding and very much worth all the work. Talamanca is geologically distinctive from its northerly neighbours and is, essentially, one ginormous granite batholith. It was inducted in the UNESCO World Heritage Club in 1983, and was the first Costa Rican treasure to have been bestowed this honour.

The Cerros de Escazú is often considered a northern extension of Talamanca, and makes up a big portion of popular San José Province. Although the whole country is renowned for its biodiversity, this region is particularly rich in flora and fauna variety, and is thus under Presidential Order protection. Particularly popular with hikers, rock-climbers and mountain bikers, the Cerros de Escazú offer excellent side-trip options from San José.

Planning an action-packed adventure in Costa Rica is child’s play, as you can see, so if you wish to bring home more than just a suntan you’d do well to include a few mountain escapades in your trip itinerary. Indulge in the trip of a lifetime with Costa Rica Rios and we’ll prove to you that if Costa Rica’s surf is queen, then its peaks are most definitely king.

A boat ride on a crocodile-infested river may sound like the ultimate nightmare to some but, for others, it can be an ...
Read More »

The first truly world-class arena built in Central America, La Sabana is one of the most iconic buildings in all of ...
Read More »