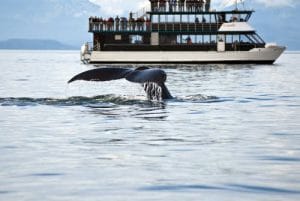 Of all the unforgettable and adrenalin-pumping adventures Costa Rica offers, none are as awe-inspiring as watching breeching humpback whales. These gentle giants of the sea, which are remarkably acrobatic given their ginormous size, are some of the most majestic mammals on earth. They can live up to 100 years and measure an astonishing 53 feet in length! They feed on krill (a small, shrimp-like crustacean) and can consume up to 1.5 tons of food every single day. Enjoying the privilege of admiring them on migration is a bucket-list activity like no other. Many who have had the chance to experience a whale sighting often describe it as a life changing event. We couldn’t agree more.

Contemplating a once-in-a-lifetime vacation to Costa Rica for this very reason? There’s no better time than RIGHT NOW! Whale watching season is here and from late July to early November you’ll have the best chances of seeing whales in migration. Follow our guide to the why, where and how, and get ready for the adventure trip of a lifetime.

Oh…and don’t forget to pack a wide angled lens for your camera!

Why Costa Rica is Best 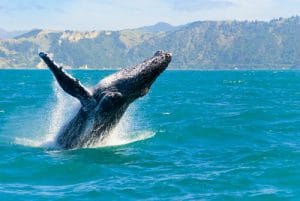 There are roughly 25 different species of whales and dolphins who migrate off the Pacific Coast every year and the humpback whale, in particular, is found here almost 8 months of the year. This makes Costa Rica home of the longest-running whale watching season in the world. Plus, you get to experience all its tropical gorgeousness, jungles and beaches, none of which is found in Antarctica. Win-win!

What Makes Humpbacks So Revered

The humpback is considered the ‘holy-grail’ of wildlife viewing, as even though many species of whales are deep-sea dwellers and difficult to spot on the sea’s surface, the humpback is never shy on coming forward. Or, in this case, on putting on a formidable spectacle for amazed spectators. Moreover, they are curious by nature and will often close in on a boat to have a better look-see. Their propensity for gymnastic, and innate extroverted nature, make them the most delightfully entertaining whales to observe.

Although humpbacks can be spotted all along the Pacific coastline at certain times of year, there are some places which they seem to prefer. The Osa Peninsula is the number one spot for whale-watching as the warm waters off its stunning coastline is where humpbacks tend to spend most of their time. A great number of day-trip excursions depart from Drake Bay however you can book trips from any of the nearby towns as they will include transport to the pier. Aside humpbacks, you can also see pilot whales and several different species of playful dolphins.

Further north is the Parque Nacional Marino Ballena. This is one of Costa Rica’s youngest nature reserves yet has swiftly made a name for itself as one of the best spots in the country spot for whale watching. On a whale and dolphin watching trip, you’ll see a myriad of other beautiful wildlife, including turtles and pelicans diving for fish in the sea. This NP is found about 180kms (111 miles) south west of the capital, San Jose, and trips can be booked through one of the many reputable agencies in Uvita, Bahai Ballena.