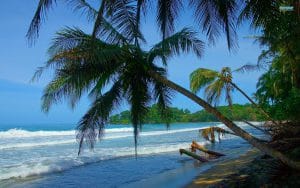 We’ll be the first to admit that the whole of Costa Rica is amazing to explore, even during these current rainy months. But if you are short on time and wish to make the most of every minute of your Costa Rica adventure vacation, then you may want to concentrate your itinerary on the eastern side of the country. Thanks to the sheltering high mountains of central mountain ranges, which absorb the moisture from the Pacific, the winds which reach the Caribbean Coast are blissfully dry. In fact, while the rest of the country bathes in much-needed rain, the eastern half of Costa Rica is enjoying the driest months of the year.

As far as tourism is concerned, the Caribbean side of Costa Rica has always suffered from some kind of inferiority complex. Some tourists claim it is not as beautiful, or wildlife-rich, as the Pacific side. The way we see it, they’re obviously going to all the wrong places! Moreover, the lack of modern infrastructure – at least to the extent found on the western side – tends to keep some foreign tourists away, yet this is precisely the Caribbean side’s most alluring aspect. Wilder, more remote and less crowded, the eastern coastline of Costa Rica is an absolute delight for anyone wanting to get off the beaten path and, at least in August to October, enjoy less rainfall.

Want to know what’s so good about the Caribbean side?

Wildlife is Second to None 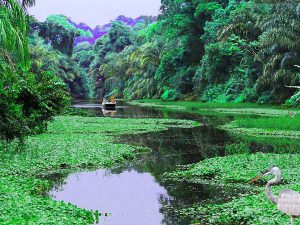 Tortuguero National Park is one of the country’s top wildlife viewing nooks and it’s located on the north-eastern tip of Costa Rica. Renowned as a turtle-nesting hub – best seen between March and October – Tortuguero is one of the hardest, yet arguably most rewarding, places you could visit. There are no roads in or out and the small town of Tortuguero can be reached only by boat (from Moin) or small plane, from San Jose.

Visiting this part of the country is not cheap, but if it’s pristine wilderness and abundant wildlife you’re after, then you’ll find no better natural haven. The diversity here is astonishing. Aside from sea turtles, you’ll also encounter half a dozen species of land turtles, as well as manatees, crocodiles and sea cows in its streams, and jaguars, sloths and several monkey species in its rainforests. An infinite array of endemic birds, as well as fish and reptiles, also call Tortuguero home. Whether on foot or by boat, exploring the far reaches of this national park is an absolute highlight of any trip to Costa Rica, rainy season or not.

Aside from the gorgeous beaches of the Tortuguero NP, the Caribbean coastline of Costa Rica is delineated by the 70 km (44 miles) long stretch of beaches between Limon and Manzanillo. Unlike the northernmost corner, this southern part is infinitely easier to reach and, consequently, much more visited. 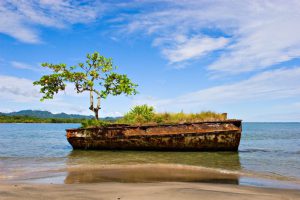 The main hub on this side of paradise is Puerto Viejo, where chilled-out surfers tend to lose themselves in the sun, sea and surf for weeks if not months at a time. This is possibly Costa Rica’s most interesting town, with its ethnic fusion of Caribbean, Tico and hippie-cool making for a rather fascinating and very captivating scene. Moreover, this whole short stretch of pristine sandy coastline is framed by wildlife-rich national parks, so if you didn’t get your fill in Tortuguero, you’ll certainly be able to indulge here as well. The nearby smaller towns of Manzanillo and Cahuita (the former reachable via a superb 12km long beach walk or short drive) are fantastic springboards for their homonymous national parks, so aside from surfing, sunbathing and snorkeling you can also hike to your heart’s content. Cahuita is also renowned for its amazing off-shore reef, making this the region’s premier snorkeling hub.

Need some more reasons to discover the Caribbean side of Costa Rica? Then pack your bags and come discover what other amazing adventures await you!

In desperate need of a family vacation? We hear you! We also understand the hesitation many families are feeling, right ...
Read More »

How to Plan a Costa Rica Adventure Honeymoon in COVID-times

As Costa Rica announced it will reopen its borders to tourists from September (see the latest reopening updates) ...
Read More »