Love adventure as much as you do the planet? Then you’d love Costa Rica! Read on to discover how this tiny nation leads in environmental protection. 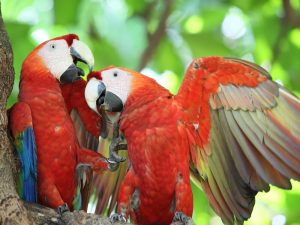 Long before the rest of the world honed-in their environmental protection efforts on reducing single-use plastic, Costa Rica had already committed to banning them altogether.

The poster-child for sustainability and eco-tourism is often used as the bar by which all other efforts are judged. From carbon-neutral coffee farming cooperatives to world-leading projects for wildlife protection and, of course, their commitment to the preservation of native flora and fauna, this tiny country continues to lead the American in environmental protection.

And isn’t that something worth celebrating?

Costa Rica is almost entirely run on renewable energy (over 300 days per year) having invested greatly in solar and wind power energy production and utilizing its hydropower and geothermal power plants to their fullest. Of course, Costa Rica can do, being home to over 60 volcanoes and 14 major rivers, each splitting into several minor ones. The country’s tropical location also translates to abundant rain every year, making the harvesting of hydropower even more successful. Pledging to be completely carbon-neutral by 2024, Costa Rica will tackle its fossil fuel emission next, overhauling their entire transport systems in the process.

In 2012, Costa Rica became the first country in the world to outlaw animal hunting of any kind both on public and private lands. At the time, this new restriction was considered extreme although, since then, the move has spurred a host of nations – quite a few African ones at that – implementing similar laws to protect their precious wildlife.

The government has set aside a quarter of its territory for environmental protection, safeguarding an array of endemic flora and fauna. That’s almost twice as much as the USA and, in the Americas, is only superseded by Venezuela, a country that despite its political and economic instability maintains an impressive land conservation rate of over 50%. All of this, moreover, is in a country which lost almost 80% of its wilderness due to over-logging and the agricultural boom of the 1960s and 70s, as it desperately tried to satisfy the food needs of the USA.

There’s a system in place which rewards sustainable agriculture

Costa Rica’s PES payback scheme aims to entice farmers to adopt greener practices such as planting and preserving trees on coffee plantations (to help biodiversity thrive and reduce water evaporation) as well as eliminate the use of pesticides. The government uses revenue from gas taxes to pay farmers to essentially reforest their farming land. The government aims to have 60% of the land reforested in a matter of decades. The move arose after the government recognized the need to protect what remained of its forests and dive, headfirst, into a fervent policy of reforestation. This incentive reward system has been in place since 1996.

Despite its relatively small size, Costa Rica boasts over 5% of the world’s biodiversity (the densest of any country) and is home to more than half a million species of unique flora and fauna. Animal conservation is high on the country’s priority which is what makes this such a rewarding travel destination. If you’re a lover of pristine wilderness and active vacations away from the frenetic pace of the modern world, Costa Rica is absolutely perfect. The country is home to eight different biological zones and over 20 distinct national parks.

Tourism trumps all other industries

Costa Rica’s dedication to eco-tourism, and tourism in general, has certainly been a multi-faceted windfall. Tourism has overtaken agriculture as the country’s main earner and has provided an income for locals who would otherwise be employed in the logging and farming industries. In return, the income generated from tourism is being poured straight back into the very highlights which attract visitors in the first place. A win for tourists, for Costa Rica and for all its incredible wilderness.

It is often said that like attracts like and this is certainly true of eco-friendly tourists. Costa Rica wants them! Whilst the country strives to continually improve its eco-friendliness, it urges foreign tourists to make the right environmental protection choices when it comes to activities, accommodation and even souvenir shopping. Unsustainable practices still exist here, of course, as do mass-produced souvenirs made abroad with cheap labor and hotels and resorts who care more about bling than the impact they make on the pristine land on which they are built. The country is home to a fabulous array of eco-friendly lodges and companies – like us here at Costa Rica Rios – whose environmental impact is constantly monitored and minimized. Because we all care and because we all benefit from a healthier and happier planet.

You can take affirmative action when planning your Costa Rica adventure vacation, by supporting businesses which improve the local economy via donation and employment programs, you can help with environmental protection by using biofuels for their transport vehicles and only collaborate with like-minded, environmentally-conscious business and establishments.

Does this sound like a bit of you? Then visit our Costa Rica Adventure Vacations page and ask us how we can create your dream vacation itinerary AND help protect and respect this incredible country.

Regarded as one of Costa Rica’s most stunning beaches, Playa Cocles is a picture-perfect Caribbean paradise. The ...
Read More »