The funniest-looking, most adorable and most coveted wildlife species in Costa Rica, the curious sloth is one of the world’s most unique creatures. It spends most of its life upside down (and even gives birth in this position) and is, as a consequence, literally built upside down too. Infamously slow and lazy, although the latter is a bit of a misconception, the Costa Rican sloth is one of the most rewarding animals to spot in the jungle and makes for a rewarding – and patient – photographic subject.

Planning your adventure vacation in Costa Rica and wondering about the best places to see them?

First, let us introduce you to the sloth species you’re likely to see and then learn all about our favorite and very best places to see adorable sloths in Costa Rica! 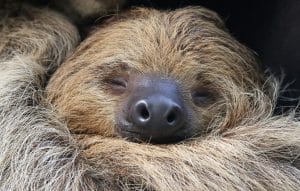 Interesting Costa Rica Sloth Facts – What to Know Before You Go

The most rewarding sloth-spotting parks in Costa Rica are undoubtedly Manuel Antonio, Tortuguero, Corcovado and Monteverde. Over on the Caribbean side, La Amistad near Puerto Viejo also usually delivers big on the sloth-spotting goods. All these regions receive a decent amount of rain, all year long, so the wilderness here is lush and fertile, facilitating life for an animal that eats seldomly but consistently.

Other parks and regions of Costa Rica that enjoy very dramatic dry seasons will consequentially be less than ideal. Remember the more annual rain a place receives, the higher the chances it’ll be home to more sloths!

Generally speaking, the Caribbean side of Costa Rica, combined with the central and southern Pacific regions (but not the coast) offer the best chances of sloth spotting in the wild.

If seeing sloths is of the utmost importance then you really should visit one of the many wildlife and sloth sanctuaries scattered throughout Costa Rica. Due to their more varied diets, two-toed sloths are more commonly rehabilitated and easily homed in refuges, so this is the species you’ll most likely meet.

Here are some of our favorite sanctuaries where you can meet sloths:

Proyecto Asis, Arenal – A wonderful wildlife rehab center near La Fortuna, Asis is one of Costa Rica’s most respected sanctuaries and we think a visit is one of the best things to do in Arenal 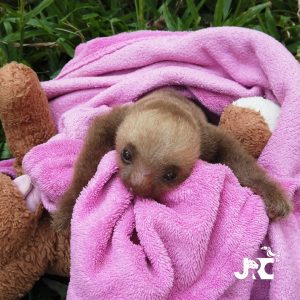 Gandoca Manzanillo Wildlife Refuge, Limon Province – Up the road from dreamy Playa Cocles near Puerto Viejo, this verdant wildlife reserve promises an amazing experience. Take a guide and your chances of sighting a sloth are just about guaranteed.

The Toucan Rescue Ranch, Alajuela – Like so many sanctuaries here, Toucan started as a dedicated refuge for very specific animals (toucans, in this case) and has evolved to cater for a host of other wildlife. Including sloths! 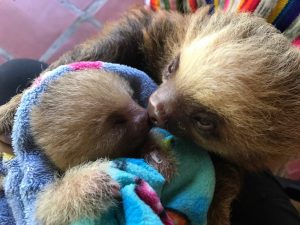 Wildlife preservation is an inherent part of life for a huge chunk of Costa Rica’s adventure parks and eco-lodges and many are home to resident sloths who were rehabilitated but due to certain reasons, like a disability, were unable to be released in the wild. In an ideal world, of course, all sloths would live happily in the wild but given this isn’t always possible, becoming a resident mascot of a glorious lodge or park set in a privately-owned reserve, really is the next-best thing

Here are a few of our favorite adventure parks and eco-lodges where you can meet adorable sloths:

Diamante Eco Adventure Park, Guanacaste – Gilbert, Mia and Lucy are Diamante’s most popular attractions, despite the fact that the adventure park boasts the longest dual zipline in the whole continent! Daily feedings by the keepers are open to the public and this is the best chance for exceptional photographs

Selvatura Park, Monteverde – This is one of our favorite hanging-bridge adventure tour destinations, with accommodation options and sloth sanctuary to boot

La Paz Waterfall Gardens, Alajuela  – An easy drive from San Jose, La Paz make for a fantastic day-tour from those who are short on time

Nayara Tented Camp, Arenal – An all-in-one nature-immersed lodge and sloth-haven, Naraya is the perfect sloth-spotting destination in Arenal. This brand-new addition to the Nayara scene, this luxury glamping lodge is drop-dead-gorgeous and set within a property home to over 300 Cecropia trees, the fave food-source of sloths

Tulemar, Manuel Antonio – A high-end vacation rental resort, Tulemar is one of Manuel Antonio’s most unique places and guests can take a ‘sloth walk’ around the property with researchers from the non-profit Sloth Institute of Costa Rica, who regularly head here to study their favorite subjects

At Costa Rica Rios, we run award-winning adventure tour vacations in Costa Rica and even though we see plenty of wildlife in the remote and pristine rainforests we tour, we’re always so happy to plan in a visit to a dedicated center.