Costa Rica is one of the world’s most prized wildlife havens, never more so than when we’re talking about birds. Not just any birds, mind you, but truly fabulous birds – some of the most magnificent and colorful on earth. The country’s idyllic climate, coupled with incredibly fertile and varied landscapes, and fervent environmental preservation, have combined over the years to create one of the most diverse aviary sanctuaries on earth.

Home to over 850 different species of birds, over half of which are endemic, Costa Rica is a bird-lover’s absolute Utopia. Here, you’ll find almost 10% of all the bird species on earth.

Here are just 10 of the most fabulous birds to spot in Costa Rica: 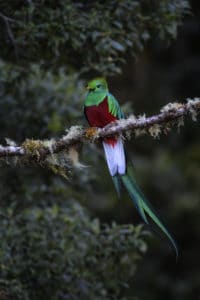 Resplendent by name and plumage, the quetzal is perhaps the most highly-coveted bird to spot in all of Costa Rica. Painfully shy and preferring to live at altitudes of between 5,000 and 6,500 feet, this most fatuous member of the trigon bird family boasts magnificent colors and almost regal green and turquoise feathers that extend an astonishing 40 inches beyond the tip of their tails. Endangered due to habitat loss, the Resplendent Quetzal is the national bird of Panama although due to habitat loss, numbers there have greatly diminished. Costa Rica, on the other hand, boasts large numbers of the majestic creatures, thanks to its pristine cloud forests.

Hiking adventure in search of quetzals are very popular tour options and usually taken between February and May, their mating season and the period of the year when they are most active. The best place to spot them is in the Monteverde Cloud Forest, the aptly-named and lesser-known Loz Quetzales National Park (a bird-lover’s mecca, in general) and Braulio Carrillo National Park, which is framed by ethereal volcanoes and boasts the kind of mid-elevation forests the quetzal cherishes. 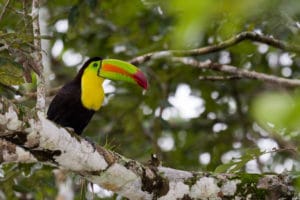 The pin-up of the Costa Rican bird-kingdom and most adored bird in all of Central America, the keel-billed toucan, aka the Froot Loop guy, never fails to stop people dead on their tracks with its jaw-dropping looks. The oversized beaks, impressive size and stunning colors of so many sub-species make toucans the most famous birds in the tropical world and the keel-billed, in particular, is regarded as the most fabulous of them all. This tucan pico arcoiris – or rainbow-beak toucan, in Spanish – is a sociable and playful creature, often quarreling with its flock members over fruit or space on an already overcrowded tree-branch.

One of six toucans found in Costa Rica, the keel-billed toucan is most often seen along the Caribbean coast, although it’s one of two species that also inhabit the Nicoya Peninsula. Tortuguero, Cahuita and Turrialba Volcano national parks are all fantastic toucan-spotting destinations as well. If you’re as toucan mad as we are, pin the Rescate Animal Zoo Ave (Alajuela Province) on your map – here, you can meet Grecia, the first toucan rescue in the world to receive a 3D-printed beak replacement. You can listen to Grecia’s amazing, tear-jerking story, right here. 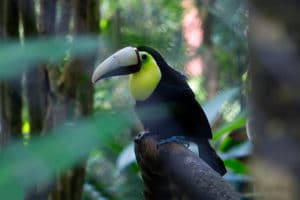 One of the most recognizable birds in Costa Rica, the scarlet macaw is an absolute visual spectacle. With its bright red head, green chest and bright blue lower-half, this specific macaw is easy to spot, even by the most untrained bird-spotting eye. Macaws are, like all parrots, very sociable birds so when you spot one, be sure to keep looking up and you’ll no-doubt see more. Macaws live to a ripe old age of 60 and have, in the past, been highly coveted as pets, which greatly diminished their numbers in the wild. Luckily, protection initiatives have brought Costa Rica’s numbers up to a healthy standard and have averted an absolute wildlife disaster.

Most commonly spotted in the south-western side of the country, the Scarlet Macaw is one of the most prized residents of the Corcovado National Park although numbers are on the up and up on the Caribbean side as well, especially in Tortuguero National Park. 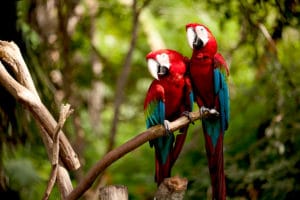 The largest parrot in Costa Rica is a cousin of the scarlet but one that is much more difficult to spot. It is usually best seen on the Caribbean side of the country. Like all macaws, it squawks so loudly that is most often heard, loud and clear, long before it is spotted. Much like the scarlet, the great green macaw used to primarily favor feasting on higher-elevation almond trees, a flora species that has been almost logged into extinction and replaced with a faster-growing lower-elevation tree, imported from Asia. Whilst the scarlet macaw was quick to switch food-source, the green macaw was reluctant to follow suit for years, so its numbers plummeted dramatically. Luckily, their taste buds seem to have finally adapted and, nowadays, sightings have increased, especially around the Rio Sarapiqui, where we run out whitewater rafting and kayaking trips. 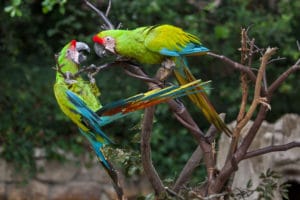 Half a dozen motmot species inhabit Costa Rica, the most fabulous of which is the blue-crowned motmot, its iridescent blue maw-hawk hairdo and bright green tail feathers making it an absolute vision against the verdant green backdrop of the forest. Commonly dubbed ‘clock-birds’, the motmot has the habit of swinging its long tail from side to side when sitting on a branch, mimicking the swing of a grandfather clock. These cute guys can be spotted all over Costa Rica but, for the highest chances of seeing them, head to the Osa Peninsula.

The motmot name comes from a mimic of the call it makes, an owl-like double hoot that is very distinctive. 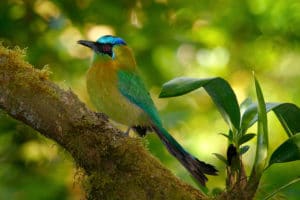 More easily described as a miniature toucan, the fiery-billed aracari belongs to the same family and displays much the same features of toucans, including an incredibly oversized beak. Lovers of fruits, coffee and cacao beans, aracaris love to hang out near plantations, where they can score exceptional meals on the fly. Endemic to the Pacific lowlands of Costa Rica and seen all along the coastline, the fiery-billed aracari is commonly found below 3,000 feet in elevation. 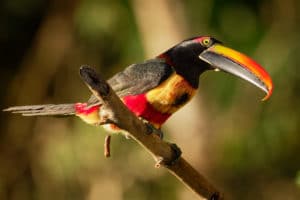 Among the most adorable birds you will likely ever see, hummingbirds delight spotters with their diminutive size and impressive wing-flapping speed. Costa Rica has so far recorded 50 distinct species of hummingbirds, two of which are totally endemic, and all showcasing incredibly iridescent colors. Although their distribution spans the entirety of the country, actually spotting them in the wild can be a little tricky. Many wildlife sanctuaries have feeders in place so visitors can see them relatively easily.

Head to Monteverde’s famous Hummingbird Garden where you can see a stunning array of these fabulous birds, including the green violet-ear and the fiery-throated hummingbird, a glistening specimen that is absolutely gorgeous. 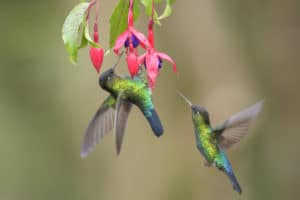 A formidable and quite sneaky hunter, the crested caracara feeds on turtles, lizards, snakes and anything else it can dig its sharp-beak into. This bird prefers slightly cooler temps and is best seen on the Pacific side of Costa Rica, most famously in Manuel Antonio and Corcovado national parks. 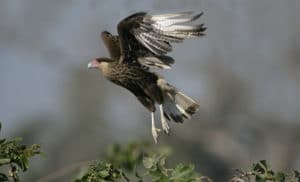 This exceptionally bright little guy with the polka-dot plumage resides in tropical rainforests and loves to hang-out in large groups, either with members of its own species or tagging along with other species. Like a true masterpiece, the speckled tanager boasts an eye-popping palette of yellow, green and turquoise feathers, speckled with black dots. This wonderful songbird favors mid-level forests and is most commonly seen on the western half of Costa Rica, in cloud forests flanking its central mountains. 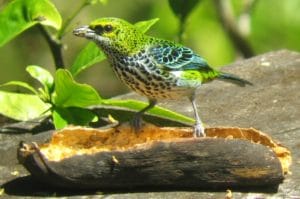 Interestingly enough, the clay-colored thrush (or robin), is perhaps the least-arresting bird to spot in Costa Rica although it is the country’s national bird. The interesting choice of mascot-bird was made not because the bird is endemic here but because its long, melodious song is a forebearer for the rain season and because, unlike more exotic and colorful species that prefer prime wilderness, the clay-colored thrush is often found in villages and cities. To bird-loving Ticos, this is the most common and beloved species of all. 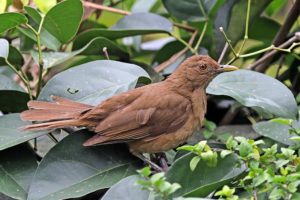 Whether you’re an avid ornithologist or a hobbyist bird-watcher, check out Ebird.Co and download the bird-spotting app that collates all the species in Central America.

Here are a few travel guides to the best national parks in Costa Rica for bird-spotting, which you may find useful:

At Costa Rica Rios, we’re in the business of running award-winning Costa Rica adventure vacations and spotting the most fabulous birds is part and parcel of every trip we take, simply because we scour the most pristine and lesser-visited pockets of wilderness in the country. If there’s a particular bird or place you wish to visit, however, we can create a bespoke itinerary to suit your desires or tell you the best way to fit in a side trip on an organised tour.

Simply call us, below, to know more.

Costa Rica is one of the world’s most prized wildlife havens, never more so than when we’re talking about birds. ...
Read More »

A term we’ve all come to know all too well in recent weeks, social-distancing doesn’t always need to conjure up ...
Read More »