Costa Rica is at the forefront of an array of technological advances. This small and unassuming nation, renowned as a nature lover’s dream destination, actually boasts quite a few phenomenal high-tech achievements. The latest revelation, that the national social security body, known as Caja, will spearhead a project to deliver essential medication to remote communities using a drone. 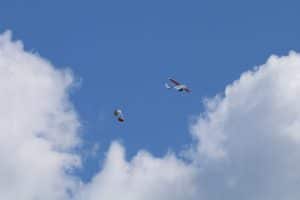 The topography of the country makes reaching its remotest corners a tad challenging, adding concerns that remote communities, most of them indigenous, simply have no easy and fast access to modern medicine. This new initiative will firstly concentrate on the region of Limon, where a total of eight communities are serviced by two medical clinics. The biggest issue with replenishing these clinics is that supplies, once ordered, can take anything between three hours and three whole days to arrive. In times of emergency, the lack of a swift delivery of needed medicine can truly be a matter of life or death.

Zipline – a Lifeline in Costa Rica

Caja is working in collaboration with Zipline, a San Francisco-based company whose aim it is to create and distribute the drone for precisely this purpose. According to Zipline, “every year, over 2.9 million children under the age of five die, and up to 150,000 pregnancy-related deaths occur, because people don’t have adequate access to essential medical products.” Zipline endeavours to change that and Costa Rica is one of the first countries to implement this incredible service.

Zip is the name given to the drone, a small miniature plane-like unmanned robot that can carry essential medicine and blood supplies, and deliver it at incredible speeds over otherwise insurmountable terrain. The expected delivery time in Cost Rica? Between 30 and 45 minutes. 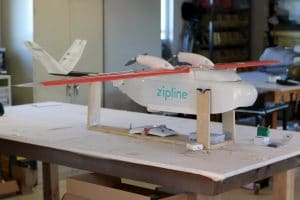 It’s believed that just a small fleet of Zips can potentially service millions of people who are otherwise cut off from their country’s main transport infrastructure.

As Zipline proudly states “No roads? No problem!”

Getting a Drone in the Air

It all starts with a simple text: a nurse or doctor in one of the clinics places an order by text message. Within just a few minutes, a Zip is loaded with supplies and sent on its way. Reaching speeds of up to 62 miles an hour, Zip will reach its destination in less than hour, alert the medical staff to its impending arrival, and drop a parachute-tied package directly at the clinic’s front door.

This truly is an amazing way to utilize our modern technology and not just change, but quite literally save people’s lives.

Caja has contracted Zipline to deliver up to 13,200 essential medical packages each and every month to the Caribbean regions of Talamanca and Valle de la Estrella. The cost is expected to be about USD 26,000 a month. Each extra delivery after that will costs merely USD 2 each.

Getting medicine where it’s needed most has been a problem which has plagued Costa Rica’s remotest regions for years. Past efforts included using boats, bicycles and horses to reach remote communities, but it’s hoped that Zipline will finally close the transport gap and reduce the number of deaths caused by lack of adequate medical supplies.

The Limon region of Costa Rica is renowned as its most exotic province. A narrow strip of wilderness alongside the Caribbean coastline. This is Costa Rica at its wildest, its most pristine and also its least developed. Nature-lovers come here to visit the array of National Parks and Nature Reserves. They come here for endless stretches of unspoiled and uncrowded beaches. The city of Limon boasts Afro-Caribbean roots and is often considered the most ‘authentic’ and unique city in the country. Lacking the tourist infrastructure found on the western side, the Limon province is a wonderful adventure playground for avid explorers.

In the north of the province is where you’ll find Tortuguero, an immensely stunning National Park renowned for its many turtle nesting sites. A flurry of wildlife inhabits the forests of Limon with a wide array of wildlife making for excellent viewing.

Yet as revered as Limon is for foreign tourists, it certainly faces its challenges. The remote areas in the south, along the border with Panama, are inhabited by indigenous tribes which are all but cut off from the rest of the country. It is hoped that Zipline will finally deliver the lifeline they so desperately need.