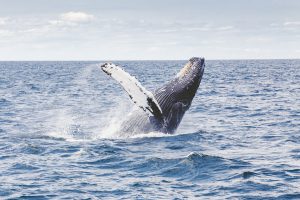 Costa Rica’s Whales & Dolphin Festival, held on the idyllic coast of Bahia Ballena in Uvita, will take place during the first two weekends in September. Considering this is the ideal month for whale watching in Costa Rica, now’s the perfect time to plan a last-minute getaway to the world’s best adventure travel destination.

The 2017 Whales & Dolphin Festival will be in its 5th year and is a well-organized event that shines a spotlight on one of the world’s most magnificent natural phenomena: the mass migration of humpback whales along the coast of Costa Rica. Aside from whale watching tours, you’ll find the town of Uvita and its surrounding areas awash with fairs, concerts, exhibitions, environmental workshops that teach all about the marine life found here and, as always anticipated, a wonderful array of exceptional food. Attracting families, singles, old and young alike – not only from other regions in Costa Rica but from every corner of the globe – the festival is a wonderful celebration of one of the country’s most revered attractions.

For any animal lover, the Marino Ballena National Park is a perfect destination. At this time of year, you’ll see not only humpback whales, but several species of dolphins, pilot whales, sharks and plenty of turtles, as well as colonies of unique and endemic birds. For experienced sea lovers, there are also options for whale watching tours by SUP and kayaks.

Amazingly, the southern Pacific Coast of Costa Rica actually harbors humpbacks almost all year round, as pods flee the cold of Antarctica and the Arctic to seek shelter in the balmy waters of this glorious country. It is in September, however, when numbers (and your chances of spotting them) are at their highest.

The small and unassuming town of Uvita is preferred by those who want a more laid-back beach vacation when in Costa Rica. Away from the well-developed north, you’ll find long stretches of palm-tree fringed, pristine sandy beaches, and just a smattering of accommodation choices.

Uvita is the best base town for adventures in Marino Ballena, the marine crowning glory of the Puntarenas Province. The park encompasses over 100 hectares of unspoilt land wilderness, as well as 5,400 hectares of pristine marine areas, including the largest coral reef on Costa Rica’s western coast.

The aptly named ‘Marine Whale National Park’ boasts a captivating landscape, with a ‘whale tail’ promontory that is simply breathtaking, especially from a higher vantage point.

This is one of the country’s youngest and most protected national parks and attracts visitors who seek an organic experience (with fewer commodities, perhaps) but with the priceless chance to be completely at one with unspoilt nature. The park hosts at least 85 unique species of marine wildlife and almost 20 species of coral. Snorkeling the reef is outstanding here and, because of its protected status, the park’s beaches are perfect for quiet sunbathing and lounging, away from the at-times rowdy crowds of surfers found further north. The waters and currents can be a bit fierce but you’ll find plenty of tranquil coves and swimming holes.

A 3 hour drive from San Jose will see you take in the countryside of Puntarenas and arrive in Uvita. Alternatively, you could also fly into the small regional airport at Quepos.

If you’re looking for one of a kind adventure-filled tours in Costa Rica, check out our comprehensive list of tours and contact us for further info. We’d be delighted to plan an itinerary that’s just right for you and help you have a WHALE of a time in Costa Rica!