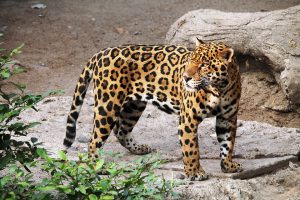 As Tortuguero National Park eagerly closes off a portion of its nature reserve in order to safeguard more habitat for the endangered jaguar, we introduce you to this iconic symbol of Costa Rica’s wildlife world. A fierce and elusive predator, the jaguar is one of the most coveted sights and is among Costa Rica’s Kings of the Wildand.   Tortuguero is arguably the hot-spot where your best chances of seeing Jaguars rests.

With its golden-hued coat and distinctive black spots, the jaguar closely resembles the leopard although is much larger in size and stockier in build. Want to find out more fascinating facts about jaguars? Then read on and discover more about this magnificent animal before you head to Costa Rica.

Jaguars are the Largest Cats in the Americas

The jaguar (panthera onca) is the third-largest cat in the world, trailing behind the lion and tiger, although boasts the strongest bite-power of all three when taken pound-for-pound. On average, males weigh between 100 and 250 pounds (whilst females are about one-third smaller) and can grow up to 7.8 ft in length.

You Could Say they Have Good Self-Esteem!

Not known to be a shrinking violet, the jaguar will take on formidable prey if it thinks it has a good chance of overpowering it. Sir David Attenborough once famously called jaguars the ‘killers of killers’ duetheir knack for taking down large and dangerous predators. Just take a look at the video below and see a jaguar phenomenally tackling a crocodile.

The Name Derives from the Native American Word ‘Yaguar’

Which means “pouncing killer”. Quite apt!

Jaguars Have All but Disappeared From the U.S.

Alas, when faced with its main threat (humankind) the jaguar has little chance. Loss of habitat has pushed this glorious big cat south to Latin America – and Costa Rica in particular – and the US is thought to now be home to only a couple of male individuals. The last female known to have existed in the US was shot in 1963 by a hunter who thought she was a bobcat. A very sad state of affairs, considering that up until a century ago the jaguar was the wilderness king in states like Arizona, Texas and New Mexico.

Make no mistake, the jaguar is still a highly endangered species in Costa Rica, but at least here it has comprehensive pockets of protected reserves where it can live and thrive. As opposed to most other cats, Costa Rica’s Kings of the Wild are water babies by nature and will never stray too far from rivers. Its preferred habitats are swamp lands, grasslands and tropical rain forests. Considering the fact that over a quarter of Costa Rica is protected reserves, the jaguar has a lot more space to roam. Jaguars are known to inhabit not only Tortuguero, but also Corcovado, Monteverde, Santa Rosa and the Rio Macho National Parks, as well as several nature reserves.

A jaguar will use its Tail to Lure Fish 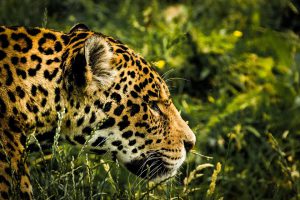 Being the cunning predator it is, the jaguar will often dip its tail in rivers in order to lure fish (much like you would with a fishing line) before pouncing in the water and catching its prey unawares.

In Costa Rica the Jaguars Have Become More Sociable

Although solitary by nature, the jaguars in Costa Rica’s Tortuguero National Park have evolved into sociable creatures and experts believe this is due to so many of them sharing a conservation area of 100 square miles, and the fact that the reserve is teeming with turtles(which they love to eat) for at least 6 months of the year, so competing for food has become a non-issue.

In Ancient Times, Jaguars were Revered

Back in the days of the Aztec and Maya cultures, jaguars featured heavily in local mythology and were the epitome symbol of strength and courage.

Due to being apex predators, jaguars are seen as pivotal to a healthy ecosystem and their roles considered vital in preserving the balance of the food chain in their environment. That’s why jaguars are considered a ‘keystone species’.

Only Around 15,000 Jaguars are Thought to be Left in the Wild

Luckily, a bevy of conservation efforts are in place in several countries, all aimed at reducing habitat loss and protecting this magnificent beast.

Costa Rica is an outstanding wildlife and wilderness destination and jaguars aren’t the only ones who think this is the best place in the world to live! Why not plan your next adventure vacation in Costa Rica and come see what other fascinating facts you might discover? Simply contact us for more info.