Renowned as one of the world’s most bio-diverse hubs, Costa Rica is home to a near infinite array of exotic wildlife. Over half a million different animal species call this country home, which equates to almost 5% of our planet’s fauna. Although there are some creatures you may not want to run into during your Costa Rica adventure trip (the common eyelash viper, for example, isn’t cuddliest of all!) there are plenty more which are incredibly adorable.

Here’s our selection of the cutest creatures you could ever hope to find in Costa Rica. But beware! Cute does not always mean approachable…

Include a few days of wildlife spotting, at the beginning or end of your Costa Rica Rios adventure trip, and you’re bound to have a truly unforgettable experience.

Jaguar
One of the most magnificent felines in existence, the jaguar is as stunning as he is elusive. Having become almost completely extinct in North America (and critically endangered in the south) jaguars are some of the most revered and protected animals in Costa Rica. Central America’s largest cat is solitary, shy and a master of camouflage, so spotting one in the wild is about as likely as winning the lotto. Still, some people manage both, so who’s to say you won’t be the next lucky punter? Head to Parque Nacional Corcovado or La Amistad, where chances may still be slim, yet are still worth a shot. 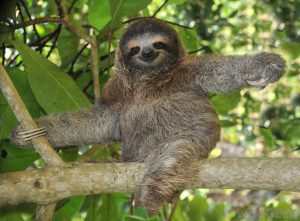 One of the most beloved and comical creatures in Costa Rica, not to mention the most adorable, the sloth is laziness personified. Here is a creature so reluctant to move that he sleeps, eats and even gives birth while hanging on a tree branch. Known for doing nothing much besides feasting on leaves and sleeping, the sloth may appear to be an easy target, yet this ingenuous creature has managed to survive and thrive phenomenally well in South America. The sloth is mostly only vulnerable to predators whenever it descends to ground to relieve itself yet thanks to its painfully slow metabolism, this is something he need do only once a week. Costa Rica is home to two species: the brown-throated three-toed sloth, and two-toed Hoffamnn’s, both of which boast the typical dreamy eyes and saintly smiles for which the animal is so renowned. In the Costa Rican wild, sloths are mostly found in the lower forests of the Osa Peninsula, Tortuguero and Puerto Viejo. Sloths are also found within Manuel Antonio National which is a small National Park in the Central Pacific Conservation Area located on the Pacific coast of Costa Rica. If however you dream of a close and personal encounter, however, include a visit Sloth Rescue Centre in Cahuita, the only one of its kind in the world.

Baird’s Tapir
The Baird’s Tapir is one of those peculiar creatures that looks like it’s a hybrid of several animals’ spare parts. With the stocky body of a rhino, and the too-short- trunk of an elephant , this unusual tapir is the largest land mammal in Central America and, although not a classical beauty, it certainly boasts a rather enticing look. The tapir is so muscle-rich, that it can usually take on a challenge from a mighty crocodile and come out on top. Although its sturdy build has ensured its survival among fellow four-footed creatures, Baird’s Tapirs are still constantly battling for survival against humans. The Parque Nacional Corcovado is where you need to go, to ensure the best bet of spotting one in the wild. 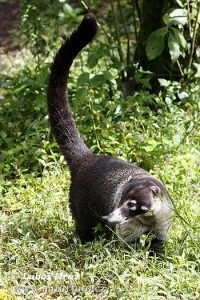 There aren’t many people who could remain stone faced at the sight of a teddy-bear like coati. This adorable creature is distantly related to the common racoon, yet boasts a much longer, upturned nose. At a quick glance it can easily be mistaken for an overweight squirrel, especially as it has a long and fluffy tail, which it keeps erect through thick foliage to guide his troops through forests. To see one of these cuties in action, keep your eyes peeled to the ground as you hike through the Arenal, Corcovado Volcano National Park, or Irazu Volcano. 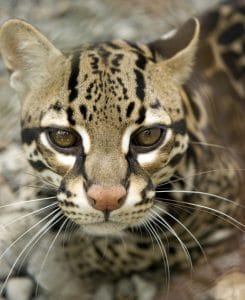 The natural reserves of Arenal and Monteverde are ideal places to see ocelots, the third-largest cat in Costa Rica. Ocelots boast a rather wide territory and can be found from Texas all the way to southern Argentina. As mysteriously elusive as the jaguar, the ocelot is often referred to as a dwarf-leopard, although it does display quite a distinctively different look. Its stupendously spotted coat is something for which the ocelot has been fervently hunted in the past, and in Costa Rica it is still considered a severely threatened species. 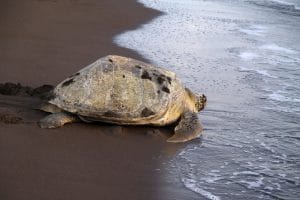 Head to Tamarindo if travelling in the months between December and February to see Leatherback Turtles, or to Ostional (further south) if travelling at any other time. Here is where you’ll likely spot Green turtles, which tend to come much more frequently to shore.  From March to October you can also head to the Caribbean side of the country and the Tortuguero National Park to see Giant Leatherbacks, Hawksbill and Green Turtles nesting.

A boat ride on a crocodile-infested river may sound like the ultimate nightmare to some but, for others, it can be an ...
Read More »

The first truly world-class arena built in Central America, La Sabana is one of the most iconic buildings in all of ...
Read More »