Revered for being one of the most bio diverse countries on the planet, the wildlife in Costa Rica is an animal lover’s dream playground. So enriched is the country with unique and interesting creatures, that you need not even specifically go on dedicated wildlife-watching tours, if you don’t have the time or wish to keep expenses down. For in Costa Rica, wildlife is everywhere.

The most common, the most famous, the most beloved and even the most feared: here is the top wildlife in Costa Rica.

What they lack in size, insects more than make up for in sheer numbers in Costa Rica, where they make up almost 60% of ALL the wildlife species. Here, you’ll see over 1,200 vibrantly colorful butterflies, which equate to more than 10% of all butterfly species on the planet. Together with an impressive array of bee species, butterflies are responsible for the enormous variety of flora which blankets Costa Rica in its entirety.

Four species of monkeys inhabit the luscious forests of Costa Rica and the fabulous thing about them is that they live and travel in big troops, so once you spot one you will have time to grab your camera and, soon enough, you’ll spot several. These noisy and clever creatures can be sneaky and have been known to steal visitor’s lunches, so hold on to your foodie stash the moment you hear the cries of the cheeky mantled howler monkey. 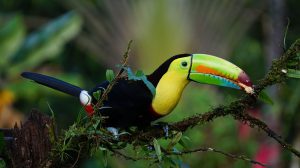 Out of the 900 species of birds found in Costa Rica, over 600 live there permanently. Non-birders can’t help but notice the more eye-catching species like the magnificent toucans and scarlet macaws, but fact is this is one of the most respected dedicated bird-watching destinations on the planet. From the lovely Yiguirro, the country’s national bird, to the stunning quetzal and impressive jabiru, Costa Rica’s birds come in all colors, shapes and make for astonishing viewing. In total, you’ll find six species of toucans inhabiting all the wonderful forests throughout Costa Rica.

Ever-smiley sloths are arguably everyone’s favorite Costa Rica wildlife and even if going in search of them gives you a crick in the neck it will be well worthwhile once you come face to face with this goofy character. Sloths do a mighty fine job of camouflaging in the canopy of low and mid-elevation forests and spotting them can actually be quite pesky. So channel your inner sloth, move slowly and carefully and you’ll no doubt soon see one just ‘hanging about’.

Renowned as one of the world’s premier turtle nesting destinations, Costa Rica is home to 5 out of the 7 existing sea turtle species, with each species preferring certain stretches of beaches. So take it slow when visiting Costa Rica, and follow our turtle-watching guide to get the most out of your trip.

Given Costa Rica’s prime location, its pristine seas are brimming with migrating whales in July and March, the gargantuan sea kings and queens make their yearly pilgrimage.

If catching a glimpse of these magnificent beasts is a priority, check out our guide to whale watching in Costa Rica for more detailed info.

Over three-quarters of all of Costa Rica’s amphibians are frogs, the most notable of which is the red eyed tree frog. As a great many of frogs are nocturnal, the best chance of spotting several species of frogs is to go on a nighttime hike, but we do recommend you take a local experienced guide with you. Not only will it be safer for you but you’ll also see many, many more creatures than you would on your own.

The Costa Rica racoon gets a lot of flak from North American tourists, with many first-time visitors assuming they are as bothersome as those back home. But this gorgeous coatimundi is much more placid but just as curious, so although you should definitely never approach one or try to pet one, there’s no reason to run away screaming! But yes…do make sure you don’t wave your sandwich around should you spot one. They are very sweet…but they still wouldn’t turn down a free lunch! 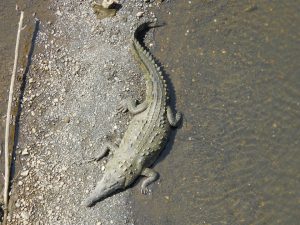 Now here’s a species of wildlife you should definitely admire from a little distance! In Costa Rica, you’ll find two crocodilians: the large American crocodile and the much smaller and less threatening spectacled caiman.

Between November and May, large pods of dolphins can be easily spotted swimming off the Pacific Coast of Costa Rica. Although dolphins live along this coast all year long, winter is when they breed so your chances of spotting many of them on a boat outing, are infinitely enhanced.

Costa Rica is home to several big cats, many of them remaining elusive and very difficult to spot. Of the 7 species, the most coveted would have to be the jaguar and the puma, with the former being the largest wild cat in the country, growing up to an impressive 2 meters in length. Of all the top wildlife in Costa Rica, the jaguar remains the hardest to spot in the wild.

Costa Rica’s idyllic location, nestled cozily between two continents and two oceans, has guaranteed an unparalleled biodiversity. In total, the country is home to over half a million different species of wildlife, representing almost 4% of our world’s flora and fauna. Given its compact size, that is quite a remarkable amount. Among the kaleidoscope of animals that inhabit Costa Rica’s rain forests, mountains, valley, rivers and seas, a few standout for their incredibly unique characteristics. 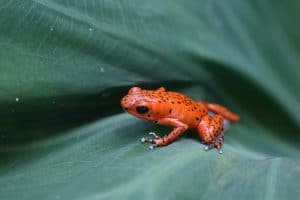 One of the most strikingly colorful creatures in Costa Rica, the Strawberry Poison Dart Frog is one of the most mesmerizing amphibians inhabiting the country’s rain forests, as well as one of its smallest. Growing to an average of only 2 centimeters (that is really very tiny) the gorgeous creature comes in different variations.

The most common is known as the Blue Jeans, thanks to its blue colored legs, but you’ll also find polka dot red or blue morphs (bastimentos) and ones with green legs and yellow stomachs, known as Chiriqui River frogs. Interestingly, the male does most of the egg rearing until they hatch, after which the mum will place each tadpole on a different pond (tiny droplets of water), where they are kept separated in order to prevent them from eating each other. It takes about 8 weeks for the tadpoles to transforms into beautifully vibrant frogs. 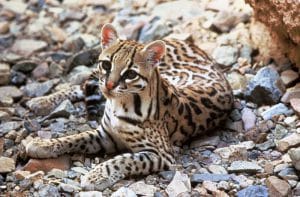 Like a real-life Puss in Boots, the Costa Rican Ocelot boasts possibly the sweetest eyes in all of the feline world. Known also as the dwarf leopard, the ocelot is about twice the size of an average domesticated cat, weighing in at about 30 pounds and measuring between 40 and 60 inches in in length.

Its distinctive fur made it a victim of hunters but their numbers are on the rise all over Central America and they are no longer listed as threatened. The ocelot’s extra-large round eyes hint at it being a nocturnal animal. Unlike other felines, it takes well to water and is an excellent swimmer, as well as a proficient tree climber. The Ocelot feeds off iguanas, birds, fish and frogs and is the second-largest spotted cat in Latin America, after the jaguar. 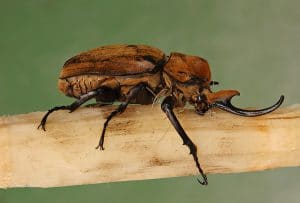 Costa Rican elephant beetles made international headlines a few years ago, when one intrepid wanderer managed to travel all the way to the UK among a bunch of exported bananas. The happy hitch-hiker was so well fed that by the time it crossed the Pacific it had grown to the size of a small hamster.

Closely related to the Scarab Beetle family, the elephant beetle is a formidable and territorial creature, one which protects itself and fights off fellow males by utilizing its rather unique tusk. Their appendages are not only fighting weapons. The elephant beetle using his horn to unlock sap from trees and dig up dirt under which he will seek refuge. As rotten and decayed wood is one of the beetles preferred meals, it is considered an essential creature for a healthy ecosystem, and one of nature’s most effective recycler. 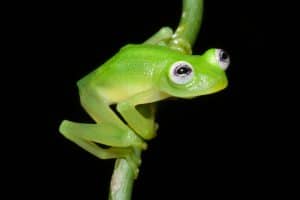 This distinctive-looking frog’s proper scientific name may be hyalinobatrachium dianae, but since it was discovered in Costa Rica just a couple of years ago it has been known, worldwide, as the Kermit Frog. For obviously adorable reasons. Part of the rare and mesmerizing glass frog species, which boast such translucent skin that their internal organs are visible, Kermit is one of 13 such species of frogs in Costa Rica.

Many people may find it odd that a lizard was ever baptized with the name of Jesus Christ but all confusion soon dissipates as soon as the lizard starts running on water. The green basilik lizard, which is actually much more renowned by its moniker, the Jesus Christ Lizard, is not an endangered species and is commonly found performing its little miracle along rivers all over Costa Rica, and all of Central America.

When in flight, it can sprint upright over the surface of water at an astonishing rate of 1.5 meters per second. Its unique feet and toes allow for a much greater surface area coverage, creating small pockets of air that allow it to ‘hover’ over the surface, and not sink. However, the Jesus Christ Lizard can’t really keep up the trick for very long. Their short burst of aquaplaning usually only last about 3 seconds, after which the lizard will eventually sink and swim off with ease. 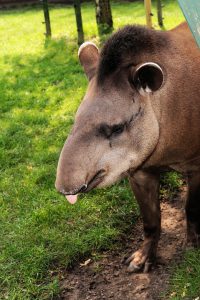 A cross between a wild hog and an anteater, but actually much more closely related to rhinos, the Costa Rican tapir is a funny little guy which is endangered in all the regions it inhabits. There are 4 different species found in the world, numbering just over 10,000 individuals in total. Deforestation and hunting are the main threats to tapirs outside of Costa Rica, and the fact that its gestation period is 13 months doesn’t help its repopulation. The tapir’s curious snout is used as a snorkel when it swims, and as a trunk to pick up leaves. In Costa Rica, the Baird’s Tapir is one of the country’s most protected animals, and a program designed to track and protect is the world’s longest-running program of its kind.

Let us whisk you away to Costa Rica on an adventure-filled wildlife spotting tour and come discover all of the country’s most magnificent creatures.

Costa Rica Adventure Vacations reopened its borders to the rest of the world on November 1, facilitating the ...
Read More »

A quirky treehouse lodge stay can be a sensational highlight on a superb family adventure vacation in Costa Rica. Given ...
Read More »