One of the most popular activities for a Costa Rica adventure vacation is the zipline. 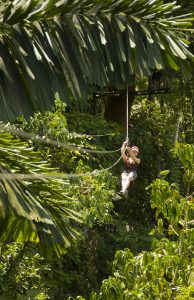 There are countless ziplines in nearly every part of the country, and each one is a unique experience. The idea of flying through the air might be intimidating at first, but it’s popular for a reason. It’s fun. They’re available in different heights and provide some pretty spectacular views. Follow these 8 ziplining tips and tricks to make the most of your vacation in Costa Rica.

1. What to Wear – Dress comfortably. Wear clothing that’s not tight and not loose. You’ll need to be able to move your arms and legs around without your clothes billowing in the breeze – or falling off! You can wear shorts, but be sure they’re long enough for a harness to fit overtop, rather than chafe your legs. Wear close-toed shoes without a heel. Make sure they’re broken in and fit you properly.

2. About Your Hair – If your hair is longer than chin length, put it up or braid it. If your bangs go down to your nose, pull them back so you can see.

3. The Little Things – Don’t plan to carry anything in your pockets that you’re not prepared to lose. Most places have lockers to stow your possessions before you go. Some allow you to wear small form-fitting bags if they won’t dangle or get in the way. Bring a camera with you that has a strap or a handle.

4. Where to Zip – There are some fabulous ziplines in Costa Rica. Decide what type of experience you want, whether it’s flying through the canopy over the rainforest or riding high above the water. Discuss your options when you’re booking your trip.

5. Follow Your Guide – Your guide is well trained to keep you safe. Listen to the instructions and always follow directions. Everything you need to know will be explained to you. Safety is the first priority. You’ll be fine if you follow your guide.

6. The Platform – If you’re nervous or new, the hardest part is usually gathering up the courage to step off the platform for the first time. You don’t need to run or jump or hold your breath. Just step off the platform and sit in your harness. Gravity and the zipline will do the rest of the work for you until you get to the other side – but your guide will explain all of that to you. (See Tip 5.)

7. Don’t Forget to Smile – The point of ziplining is to have fun. It’s probably one of the main reasons you’re even thinking about it. You might be nervous about heights or swinging through the trees in an unfamiliar place, but smiling will make you less nervous. There’s an exhilarating feeling that comes with an adrenaline rush. Smile when you have it.

Ready to go ziplining? Contact us at Costa Rica Rios when you’re ready to plan your trip. 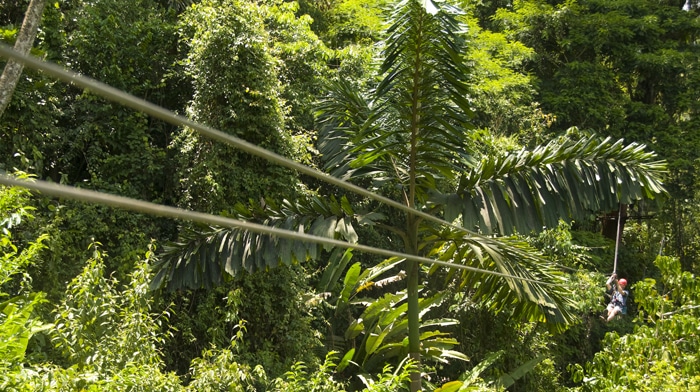 When making your Costa Rican vacation plans make sure that you include a visit to Manuel Antonio on the Pacific Coast. It’s one of the premier beach destinations in Costa Rica. It boasts all the amenities you would expect. From backpacker style accommodations to luxury hotels (and everything in between), Manuel Antonio has it all.

So what drives so many people to Manuel Antonio?

It has some of the best beaches in the country and one of the best, and most accessible, National Parks. It’s an easy 3-hour drive from San Jose and the international airport.

Manuel Antonio National Park was established in 1972 and is Costa Rica’s smallest park. In 2011, it was awarded the distinction of  one of the world’s “Top 12 Most Beautiful Parks” by Forbes magazine, and for the many visitors who passed through the park’s gates before then, it came as no surprise.

There are four beaches within the park itself, Manuel Antonio, Espadilla Sur, Teloro and Playita, that have well-marked trails making for easy access.

If beaches are not your thing, then maybe the wildlife is. The park has 109 species of mammals and 184 species of birds within its borders.

You are almost guaranteed to find both types of sloths and 3 of the 4 species of monkeys found in Costa Rica – Howler, Squirrel and White Headed Capuchin).

Other than the National Park, Manuel Antonio is a magical playground for families, newlyweds and solo travelers alike. There are endless options to keep yourselves occupied, with some of the most popular activities being snorkeling, jetski riding, surfing, ziplining or simply lying on the beach and relaxing.

So why not include Manuel Antonio in your itinerary? It’s one of the most famous destinations in Costa Rica. Contact us today to see how Costa Rica Rios can help include it in your vacation package.

In most parts of Latin America, there is one thing that brings all people together. Regardless of religion, economic status, or political beliefs, one thing unites everyone: dancing. It is this that is the blood of the culture.

And Costa Rica is no exception. Indeed, you would be hard pressed to find a city or village (“pueblo”) without a dance on Friday night (or, in many places, every night). Here are some of the most popular dances that you can enjoy with your new life partner. Practice the steps before your trip (or take a class in country, or just wing it) and go wild!

For the perfect honeymoon in Costa Rica, there is little better than letting your feet fly. The plentiful dances can be a wild experience and a great way to meet locals and experience the authentic flavor of he country. Ready to go? We’re ready for you. Just contact us to plan the perfect adventure for you and your partner!

Planning Your 2021 All-Inclusive Honeymoon in Costa Rica? How to Make it Happen!

If your 2020 destination honeymoon plans were derailed, now’s the perfect time to right that travesty! Plan your ...
Read More »