Stories of barbaric human acts towards animals are not exactly unique, unfortunately. Yet few have managed to capture the imagination and care of the world like the story of Grecia, the toucan.

The hapless toucan was found last year in the small Alajuela Province town of Grecia, from where she eventually gained her name. She had been horrifically injured by children and had more than 50% of her top beak ripped off. The photos which circulated the internet were impossible to watch. The news even prompted the Costa Rican President Solis to urge for new animal cruelty laws to be introduced. A new animal protection law is currently still pending in Costa Rica’s Legislative Assembly. 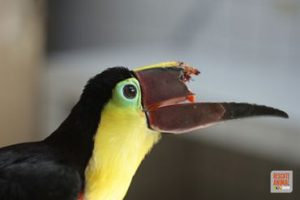 A toucan’s beak is not just a beautiful ornament. It is an essential and life-sustaining part of the majestic bird. Without it, Grecia was unable to feed herself, regulate his body heat, nor was she able to responds to a mate’s call. Without a new beak, her prospects were less than rosy.

An online campaign to save Grecia was started almost immediately. And, now, almost one and a half years later, Grecia is the proud and happy receiver of a brand new, 3D-printed beak. All thanks to the folks at the Rescate Animal ZooAVE animal rescue center and everyone who helped raise the $10,000 needed to see the project to fruition.

The first photos of Grecia with her new beak were published a few month ago, showing that the result of all the hard work certainly paid off for the gorgeous Costa Rican creature. 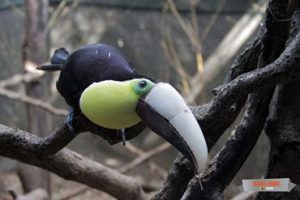 Rescate Animal ZooAVE’s Facebook page even boasts a stunning ‘before and after’ Grecia photo as their background pic.

The injured toucan was taken to the ZooAVe animal rescue center in La Garita as soon as he was found. When his story hit the headlines, the center was contacted by several 3D printing companies, all eager to land a hand. Or, in this case, at least half a toucan beak.

Grecia’s new beak is a result of collaboration between local technicians from Grupo SG, who were in charge of scanning the prosthesis, and experts from two Costa Rican companies (EwaCorp and Elementos 3D), who took care of the actual 3D print. A donated beak from a deceased toucan was used to correctly shape and design Grecia’s new beak. This method was also used last year, in Brazil, to replace the tip of a toucan’s beak which had been mutilated during trafficking.

Interestingly enough, female toucans select their preferred mates by the color of their beak, so Grecia may well have another tough challenge ahead of him.

Costa Rica is an unparalleled wildlife haven, home to countless species of birds, mammals, fish, insects and reptiles. Birdwatching is one of the most popular reasons why people travel to this eclectic tropical country. It is often said that if you enjoy a Costa Rica vacation and don’t spot a toucan, you’ve obviously been walking around blindfolded! Or, perhaps, you were too busy focusing on that wicked whitewater raft course.

Visit Costa Rica and you’ll see toucans on fields and forests munching on wild fruits and nuts. Yet usually, you are likely to hear them long before you see them. These are some distinctively loud creatures indeed. Half a dozen toucan species are known to be living in Costa Rica, preferring tropical rainforests sparse woodland, which makes for better foraging. From the Caribbean lowlands to the ever-popular Manuel Antonio National Park, toucans can be spotted in all the country’s major nature reserves.

Costa Rica is home to no less than 28 of the “world’s most irreplaceable places” and we can help you discover as many of them as you wish. So peruse our website, give us a call, and we can help you plan an unforgettable journey through one of the world’s most wildlife-rich nation. And if you wish to include a visit to the amazing ZooAVE animal rescue center, we can help with that too.