People all over the world prepare for Halloween by dreaming up elaborate scary costumes and stocking up on ginormous pumpkins. Ticos, on the other hand, start putting gin their orders for oversized masks, in anticipation of the Day of Masquerade.

The Dia de la Mascarada (Day of Masquerade) held on Halloween is a relatively recent tradition in Costa Rica, one which has picked up momentum in the last few years. Although celebrating Halloween the ‘traditional’ way (ie. US-style) has certainly increased in popularity among young locals, the tradition of Masquerading is making a resurgence. You may not see local kids door knocking and trick-or-treating on October 31, but that certainly doesn’t mean you won’t be privy to a host of festivities. Traveling to Costa Rica for Halloween is actually a fantastic idea as you can partake in one of the most boisterous Costa Rica festivities of the year. 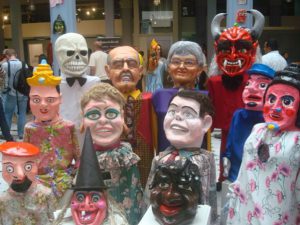 How the Day of Masquerade…

The Day of Masquerade is a tradition which stems from Carnival, a costumed ‘fiesta’ which was imported by the Spanish when they hit the Central American shores. Masked parades are very popular in the country and held several times a year, although the tradition was swiftly fading, especially among the youngest generation. It was only two decades ago that a deliberate attempt to bring back a passion for the parades, and reaffirm the importance of mask-making skills, was made. The first National Day of the Masquerade held on October 31, was in 1996.

Interestingly enough, pre-Columbian tribes had their own masked and costumed rituals, and in Costa Rica nowadays the parades are a gorgeous mix of both ancient and contemporary traditions.

The day of the Masquerade is celebrated all over Costa Rica, however, the three cities with the largest celebrations are Cartago, Escazu and Barva de Heredia. This has to do with the actual craft making skills of locals: it is in these three towns that the best ‘mask makers’ in Costa Rica are found. Unlike what the name suggests, Costa Rican ‘masks’ aren’t merely masks: they are oversized paper mache heads depicting prominent characters from politics, mythology (devils and animals are popular) and even sports and film.

The making of a single mask is a time-consuming and tedious affair, beginning first with a hand-made mold made out of clay. Left to dry for about a week, the mold is then meticulously covered with strips of paper which are attached to each other with a glue made of flour and water. This process continues until fifteen layers of paper have been added. Once dried, the clay mold is removed, leaving a perfectly shaped paper mache face.

The Costa Rican masks are as exaggerated in their expression as they are in size. Some can be comical while others downright grotesque. Seen here is ‘La Giganta’ a popular giant lady mask which symbolizes the opulent ladies of Colonia-era Costa Rica. 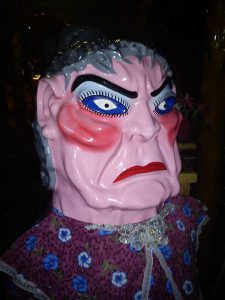 As the masked participants of the parades meander down the main streets, they dance to the rhythm of local folkloric music. The tunes are played by so-called Cimarronas, whose skills are particularly revered. Cimarron band members are self-taught. There are no scores to read so each must learn by ear. This musical part of the Day of the Masquerade is one of the oldest traditions in Costa Rica and one of the most protected by the Ministry of Culture.

Costa Rica’s National Day of Masquerade is a wonderful event which brings together all the eclectic attributes which have combined to create this very unique country. You may not get to trick-or-treat and you may not gorge on pumpkin pie. But come visit anyway and what you’ll experience is one of the most colorful, historic and endearing festivals of the year. And because it’s Costa Rica, you know that delectable food and fantastic celebrations are an absolute given!

Is Costa Rica Suitable for a Family Vacation?

Given Costa Rica is renowned as an adrenaline-junky’s dream, many families wonder if the country is a suitable ...
Read More »

With its lush jungles, array of wildlife, innumerable volcanoes, waterfalls and idyllic beaches, Costa Rica is one of ...
Read More »