Arribadas are synchronized turtle nesting events on a mass scale, whereby tens of thousands of turtles converge on very specific beaches to lay millions of eggs, simultaneously. For threatened Olive Ridley Turtles, the favored beaches are along Costa Rica’s Pacific coastline and, more famously, Ostional Beach in the Nicoya Peninsula. Arribadas, whose term translates to ‘arrivals’, are incredibly magical events to witness and occur over a period of several days, usually up to a week.

Costa Rica’s magical arribada of Olive Ridley turtles are recognized as one of the world’s true wonders of nature. 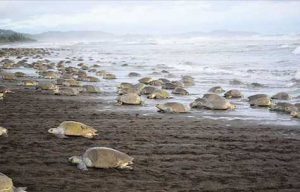 What makes arribadas so exceptional is the fact that not much is known about them. To this day, scientists are still in the dark as to how thousands of turtles know to return to their own nesting beaches, year after year, and all at the same time. Their innate homing ability is one of the greatest mysteries of nature, especially when one considers the sheer distances each animal covers, over the course of a year. Moreover, as turtles reach maturity at about 10 years of age, it means that hatchlings who are born here will not return for at least 10 years. Yet they will still know that this is the beach they were hatched and this is the only place in the world they must return to

In Costa Rica, bearing witness to an arribada is one of the most iconic experiences you could ever dream to have and if you time your visit to the country just right, you could include one in your itinerary.

One of the world’s last true unspoilt countries, Costa Rica is home seven marine turtles, including the threatened Olive Ridley and the Giant Leatherback, the largest species of its kind on our planet.

Olive Ridley turtles arribadas occur sporadically all year long yet the ones with the highest numbers happen during the rainy season, between August and November. They take place about 10 days before each new moon during this period, and you’ll see endless waves of sea turtles to come ashore and lay millions of eggs in shallow holes in the sand. Aside from one other specific spot in India, this is the second largest Olive Ridley turtle nesting site on the planet. The immensely instinctive behavior of nesting turtles makes them very determined, so they seem not to be affected by onlookers at all. Understandably, there are very strict codes of conduct during arribadas in the most visited beaches, to help avoid the kind of disruption which occurred in Guanacaste back in 2015 when thousands of turtles, and onlookers, descended on the same beach simultaneously. 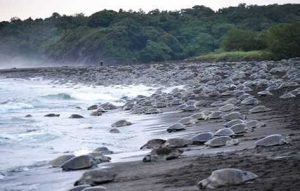 There are volunteer associations that help hatchlings make it ashore. Given that arribadas occur during low tourist season, the local Ostional Guide Association is always happy to accept help in times of need and if you’d love to be a part of this incredible event, and lend a hand, you can contact them here.

Arribadas – a Danger at Every Turn!

Arribadas are dangerous affairs, both for the mothers that come ashore to lay their eggs and the eventual hatchlings who will struggle and face unfavorable odds to make it to the sea. Predators and threats abound, not only from other animals (including human poachers) but also from their own kind. Arribadas happen in waves (literally and figuratively speaking) on any given night, and due to their sheer numbers and the turtle’s seemingly self-centered instinct, the first ‘wave’ of laid eggs actually has a high chance of being destroyed by subsequent turtles who trample all over them. The local government has been criticized for making this the only place where harvesting turtle eggs is legal yet their rather logical solution to a huge problem has actually been very effective at promoting the overall survival of the species. 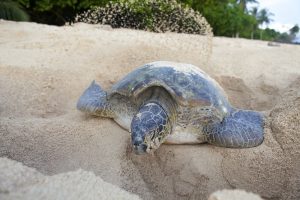 In Ostional, locals are allowed to take and sell a certain number of turtle eggs that belong to the first wave of an arribada, eggs that have the highest chance of being destroyed. They can fetch a considerable amount of money. In return, however, locals keep a vigil over the subsequent waves, helping to keep poachers, stray dogs, crocs, vultures and coatimundi at bay and giving the hatchlings the best chance at life. It is a solution which drew skepticism at first, but one which seems to be working remarkably well. Local communities are also being educated as to the importance of these arribadas and are becoming quite vocal protectors of the events.

Although human help is arguably warranted, it is also restricted. Witnessing an arribada, in all its natural glory, therefore, can be both mesmerizing and totally heartbreaking. Not every turtle and egg can and should be saved or helped. Nature also needs to take its course.

Costa Rica’s Olive Ridley arribadas can attract up to 150,000 turtles. The largest ever recorded occurred in November, 1995, when half a million turtles turned up for an arribada of astronomical proportions.

Around 45 days after eggs are first laid, another wave occurs. This time, of tiny little Olive Ridley turtles hatchlings! Their own struggle to reach the seas is monumental. Flapping over what is, to them, colossal sand dunes, the hatchlings must dodge predators at every turn. Although, once again, human help is at hand, the actual scrambling to sea from their nest is a very important process as it helps the baby turtles develop their lungs. Moreover, scientists –even though are not 100% certain – do believe that setting a course over sand to the sea helps them develop the very homing skills they’ll need to tap into, in order to return. So in this particular case, help is mostly limited to protecting the hatchlings, not picking them up and taking them to sea.

Scrambling to the sea is something they must do on their own. 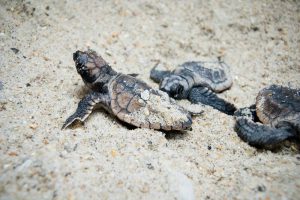 Survival odds may be stacked against Olive Ridley turtles from before they are even born yet thanks to a little bit of human help, and Costa Rica’s magical arribadas, the state of the species continues to improve, year after year.

Traveling to Costa Rica during rainy season offers huge rewards. Not only can you bear witness to a magical arribada on the Pacific Coast, but you’ll find fewer tourists and lower prices no matter where you go. For help in planning an adventure-filled trip to this outstanding country, contact us today.