The Slow Food Movement was first dreamed up in Italy in 1986, as a way to combat the popularity, worldwide, of unhealthy and environmentally damaging fast food. The premise is quite simple: to shine a light, promote and protect authentic regional cuisines, and preparing wholesome and nutritious meals using only organic, locally-sourced produce. The idea spread around the world like wildlife, infecting countries as far afield as our own beautiful Costa Rica. The culmination of Costa Rica’s love affair with the Slow Food Movement was the wonderful Slow Food Fair which took place last month in the capital, San Jose.

Featuring stalls brimming with regional culinary specialties of the highest order, from cheese to coffee, chocolate and unique fruits and vegetables, as well as stalls selling local arts and crafts, the Slow Food Fair – or Mercado de la Tierra – aimed to showcase unique regional produce and products that are made with so-called ‘clean technologies’, which are farming methods specifically designed to reduce environmental and animal impact.

The premise of the movement is admirable and it’s certainly found its ideal home in a country so enriched with regional culinary culture.

The Slow Food Movement focuses on the conscientious farming, production and consumption of food. It promotes local produce, wherever one may be, and the sharing of food to prevent wastage and mindless consumption. Costa Rica, at its core, is the very personification of this movement. Meander your way through any of the weekly produce markets held all over the country, and you’ll feast your eyes on fresh fruits, vegetables and herbs you’ve probably never seen. Vibrantly fresh, aromatic and undoubtedly local, the fresh produce here is second to none. The country is brimming with organic farms, where GMO is shunned in favor of sublimely fertile soil and an ideal climate. Add to that a culture that is near food-obsessed and what you have is a feast for the palate and the soul. Every single day.

Mind you, it hasn’t always been like this in Costa Rica, a country that has always had the potential for great culinary greatness, but one seduced by the allure of the imported. Like many other countries in the tropics, the belief has been that imported must always be better than local when, in fact, it most often isn’t. In the last few years, however, there has been a noticeable shift in thinking, not just in Costa Rica but in other less-developed countries too. A return to nature, if you will, and the sparking of a new and deeper love affair with indigenous ingredients to make authentic dishes following old-school regional recipes.

The tourist industry hasn’t exactly been kind to local Costa Rican cuisine either, if truth be told. Many come here for a week, surmising local fare to be bland and simple, never giving a second-thought that perhaps they should frequent a kaleidoscope of different food outlets. Instead, they’ll look out for Italian pizza joints or sodas selling hamburgers and chips. But authentic Costa Rican food is delightful and unique, flavorsome and wholesome. And, more often than not, is prepared and savored at leisure. 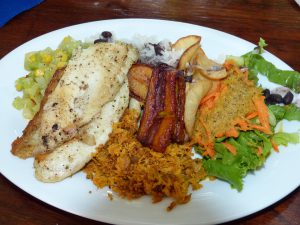 landestinos are local unlicensed restaurants and, not unlike agriturismo farms in Italy, lack any kind of structure or menus. They are held in people’s homes, are known only to locals and having a meal at one can take anything from half an hour to three hours, depending on what time of day you visit. Clandestinos serve the most authentic food in the country, cooked by mothers and grandmothers with recipes passed down through the generations. Whilst most tourists pay top dollar for mediocre fare (the travesty of this is they go home thinking food is boring here) astute travelers know to seek out a clandestino. They go there with only a few dollars in their pocket and plenty of time up their sleeve. Real Costa Rican food, of delicious tastes, local ingredients and old-world methods, takes time. And it’s always worth it. Yes, you can find tamales, empanadas and ceviche served in touristy restaurants, but once you taste them a la authentique, you’ll never go back.

The slow food movement has always been part and parcel of Costa Rica life. When you visit Costa Rica, leave your watch at home and seek a more authentic culinary experience in this magical place. Your taste buds will thank you for it.

The recent spotting of humpbacks just off Playa Matapalo has once again highlighted the exceptional whale-watching ...
Read More »

Often described as heaven on earth, an Isla Tortuga day cruise is one of the most rewarding excursions you can plan ...
Read More »

At Costa Rica Rios, as per government guidelines, we are running a skeleton crew at the moment with all staff working from the confines of home. If you are trying to contact us by phone, and don’t get through, please don’t worry and instead email us on [email protected] and we will get back to you as quickly as possible